Should You Rethink the Seltzer Water?

Add pressurized carbon dioxide to water, and you’ve got a refreshing, bubbly beverage to enjoy. Whether you refer to these fizzy drinks as carbonated water, sparkling water, or seltzer water, one thing is for sure: these carbonated beverages are flying off retail shelves as people turn away from soda and sugary drinks.

Brands like LaCroix, Sparkling Ice, Perrier, and Bubly dominate the carbonated water market, with sales growing an estimated 118 percent between 2013-2018. But as the drinks rise in popularity, the debate continues to heat up as researchers question whether the beverages could be detrimental to your health. And the answer isn’t so black and white.

The Verdict on Seltzer Water: Is It Bad for You?

Drinking plain carbonated water isn’t necessarily bad for you. In fact, it’s a great alternative to regular soda, and it’s proven to be just as hydrating as regular water. But all seltzer brands aren’t created equal. Before you pick that seltzer water off the shelf, you may want to give it a little extra consideration. Here are just a few things to keep in mind.

That zero-calorie bottle might contain hidden artificial sweeteners, especially if you’re dealing with a flavored seltzer. Be sure to read the ingredient list carefully. A common sweetener in seltzer is aspartame, the same chemical found in diet soda.

The body is typically unable to metabolize artificial sweeteners, which is why they usually contain zero calories. There’s also evidence to suggest that artificial sweeteners could contribute to weight gain. Since sweeteners may make you feel less full than you really are, extra cravings and overeating are possible. 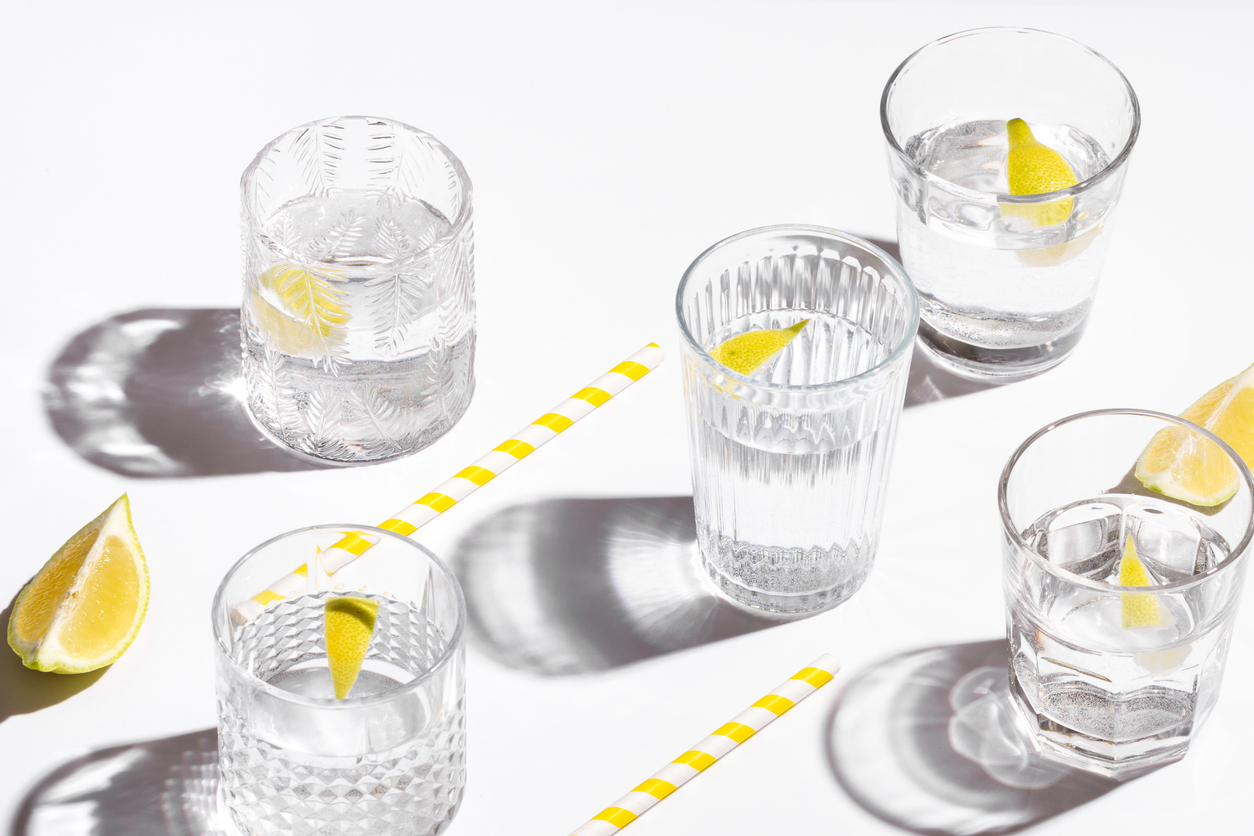 Watch out for extra acids

When carbon dioxide dissolves in water, carbonic acid forms, and causes seltzer water to be slightly acidic. The drink’s acidity adds to the debate about whether carbonated water could contribute to dental health problems, like tooth decay and enamel erosion. But carbonic acid is a very weak acid and unlikely to cause any significant dental health concerns.

However, the risk increases if seltzer contains other acids, such as citric acid, or you consume seltzer with other sugary drinks. Many dentists also recommend drinking regular water over its fizzy alternative. “If you drink only seltzer water, you’re missing out on the benefits of fluoride,” said Elizabeth Robinson, Doctor of Dental Medicine (DMD) at Cranford Dental.

Seltzer water could lead to an IBS flare-up

Consuming carbonated water won’t cause IBS, but it could worsen your digestive symptoms. “The carbonation can cause gas or bloating, and the GI tract might have trouble breaking down sweetened seltzers. For people with IBS or sensitive gastrointestinal tracts, consuming too much seltzer water may increase flare-ups,” said Christine Bendana, nutritionist and founder of PrepYoSelf.

If you have a sensitive bladder, complications are possible

“The carbonation from seltzer water can be a powerful bladder irritant, especially when paired with other irritants, such as coffee, tea, and orange juice,” said Angela Fishman, a licensed physical therapist who specializes in pelvic floor therapy.

She recommends limiting your intake if you suffer from overactive bladder and/or painful bladder syndrome. The drinks can further complicate bladder problems leading to urinary frequency, urgency, and even leakage. If you experience these issues, “try switching to plain water for three days, and see if your symptoms diminish.”

In summary, plain seltzer water is a healthier alternative to soda and other sugary drinks. But always check the ingredient label for additives that may be harmful to your health, especially if you’re considering a flavored seltzer. And if you experience any complications from the carbonation, try flavoring your water with a lemon or orange instead.

You are what you eat! These are the foods that can age you — and what to eat instead.

The post Should You Rethink the Seltzer Water? appeared first on Prime Women | An Online Magazine.