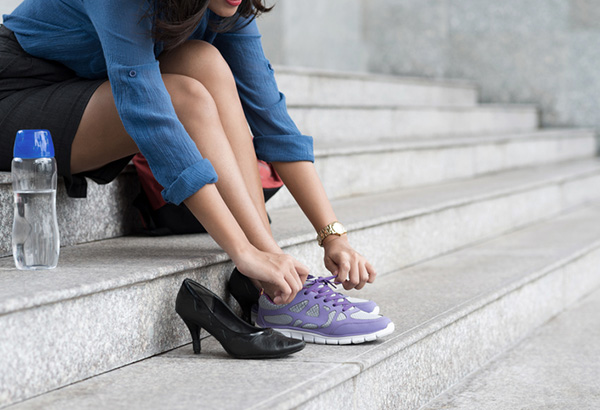 Don’t Let the Downside of Menopause “Weigh” on You

Do you think that weight gain during menopause and after is just a fact of life? Rethink! A study about menopause weight gain reveals that most midlife weight gain is due to a reduction in spontaneous activity. What’s spontaneous activity? Well, surprisingly it’s not your workout that matters most. It’s the long hours of sitting and not getting up for breaks. Resorting to an email instead of a visit to your colleague’s office, or taking lunch at your desk instead of having to get up and go somewhere could cost you those extra pounds. It’s even avoiding water so you don’t have to worry about bathroom visits. Anything you do that raises cortisol can increase the chance you’ll gain menopause weight.

That correlates with an International Journal of Obesity study that shows the longer hours a woman works the more menopause weight she gained. Women in the study worked any where from part time to 49 or more hours a week. As the number of hours per week increased so too did the weight gained. Researchers were careful to mention that it wasn’t the hours alone but the long hours that influenced women to make choices that led to weight gain.

Those are most likely to include:

While you’re working long hours you may not intentionally self-sabotage, but it’s not helping you avoid menopause weight gain. A lack of time to implement habits leaves you vulnerable to repeating habits that over time could lead to weight gain. Flip those habits with simple daily changes and you may find you’re down a few the next time you check.

My client, Marcia, works in health care administration with long hours, considerable stress, and a commute bookending her day. Exercising for an hour a day was a ridiculous concept. She knew she liked the way she felt when she’s exercising but the need to be on the train by 6 or in the office by 7 for meetings made that next to impossible. Rarely home until 8 some nights, leaving next to nothing for winding down, dinner, and enough sleep to cope.

What we did was optimize Marcia’s weekends and then added at least 10 minutes twice a week for a home weight-training workout. Her investment was maybe $100 for dumbbells heavy enough to reach fatigue and an exercise ball. A funny thing happened, though. Once she had morning exercise habit in place, she began to use the gym across the street she actually belonged to already. On mornings when she could steal a little more time she went to a short early morning spin class or did 20 minutes of intervals on an elliptical at the gym on her own.

The biggest obstacle for Marcia getting started with morning exercise was getting up. The solution to that started the night before. She not only had to go to bed earlier but she had to tweak her diet. She was eating foods that didn’t agree with her, eating too late, and both habits kept her from getting a good night’s sleep. If you wake up feeling hung over you aren’t going to be motivated to exercise and you’ll not be able to avoid menopause weight gain.

Seasonal pants she’s not had on for a few months fell to the floor with no hope of a belt saving them for wear. She bought a bike and she’s more active and outdoors on the weekends, all helping reduce her stress and enhance her food and lifestyle health habits.

Tips to be your own success story:

The post Don’t Let the Downside of Menopause “Weigh” on You appeared first on Prime Women | An Online Magazine.