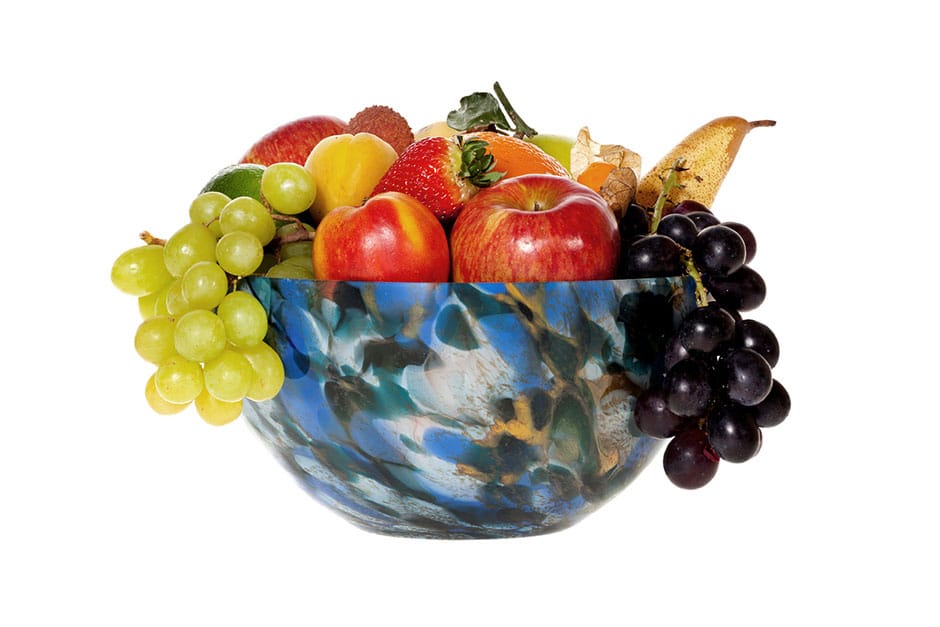 We’ve all heard the health arguments for eating organic foods. Well, here’s a health concern that may grab your immediate attention: The pesticides and fungicides, and even synthetic fertilizer, used on commercial crops contain chemicals that encourage weight gain and make it harder to take those pounds off. Ditto the hormones and steroids fed to conventionally raised meat and poultry, and even farm-raised salmon. 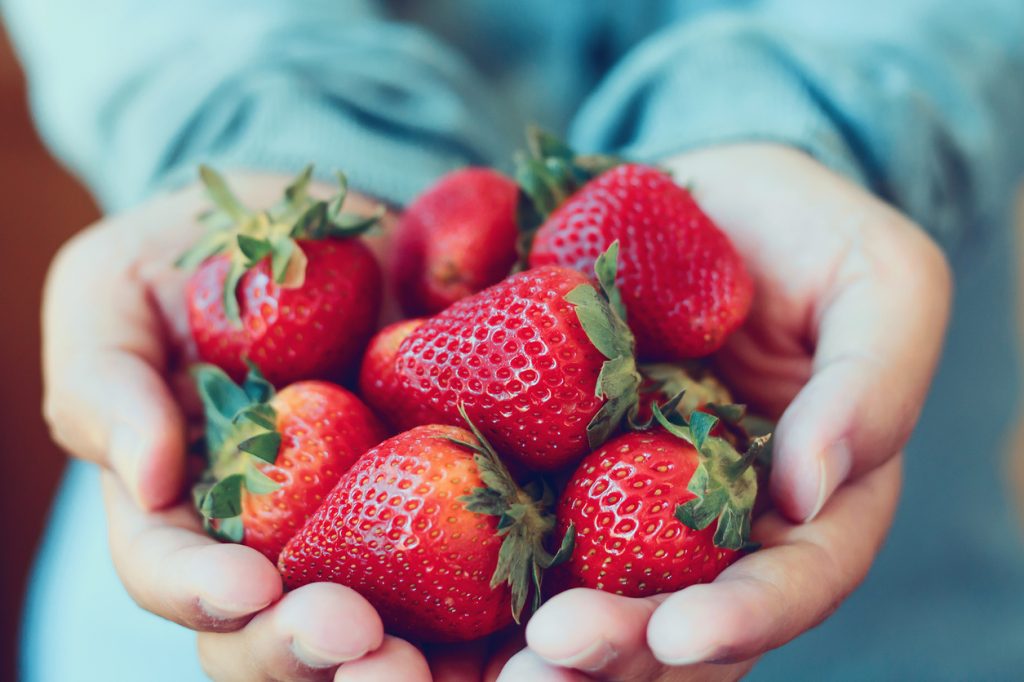 That’s the bad news, and you’ve probably heard some version of it before. The even worse news is that the worst foods are some we’ve long been encouraged to eat more of. In the case of fruit and vegetables, there’s the “Dirty Dozen,” and topping the list for the past three years are innocent-looking conventional strawberries, with one strawberry sample containing as many as 20 different pesticides.

The Dirty Dozen List is compiled annually by the Environmental Working Group and includes:

So much for summer’s bounty. What the additives found in these foods have in common is that they are obesogens, environmental chemicals found in pesticides and fungicides used in fertilizer and sprayed on growing plants that can predispose people to weight gain and the subsequent struggle to take it off. Food-additive obesogens include artificial sweeteners, preservatives and added sugars. Other common obesogens show up in food from chemicals such as bisphenol A (BPA) used in packaging, especially plastic wrappings and can linings. These are all in addition to the pesticides and fungicides sprayed on conventionally grown produce.

The connection may seem a stretch—another reason for well-fed Americans to blame anything but our own bad eating and exercising habits—but it’s not.

Obesogens belong in the larger category of endocrine-disrupting chemicals (EDCs), and they interfere with the hormone estrogen, which in adults protects against abdominal obesity, thought to be a most-problematic kind. Although most research to date has been done on animals, the “role of environmental 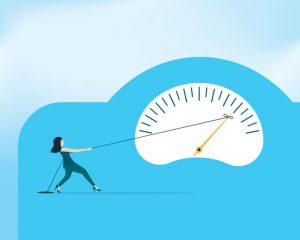 chemicals in obesity” has been acknowledged by the National Institutes of Health Strategic Plan for Obesity Research. The American Medical Association has also acknowledged that obesogens may play a strong role in our nation’s obesity rates. The most serious effects are in adipose tissue, which releases hormones related to appetite and metabolism. Some obesogens alter hormones related to appetite, satiety, food preferences and energy metabolism. What most obesogens have in common is that they start by increasing body fat. As the amount of body fat increases, more EDCs will be stored along with other environmentally polluting chemicals, according to biologist Philippa Darbre at the University of Reading. UCSF clinical pediatrics professor Robert Lustig points out:

“Even [people] at the lower end of the BMI [body mass index] curve are gaining weight. Whatever is happening is happening to everyone, suggesting an environmental trigger.”

Even more culpable than produce in the obesity cycle may be the meat from corn or soy-fed chickens and cattle (soy feed is the culprit in adding obesogens to farmed salmon as well). In particular, cattle are often treated with mega-doses of hormones such as estrogen, progesterone and testosterone. 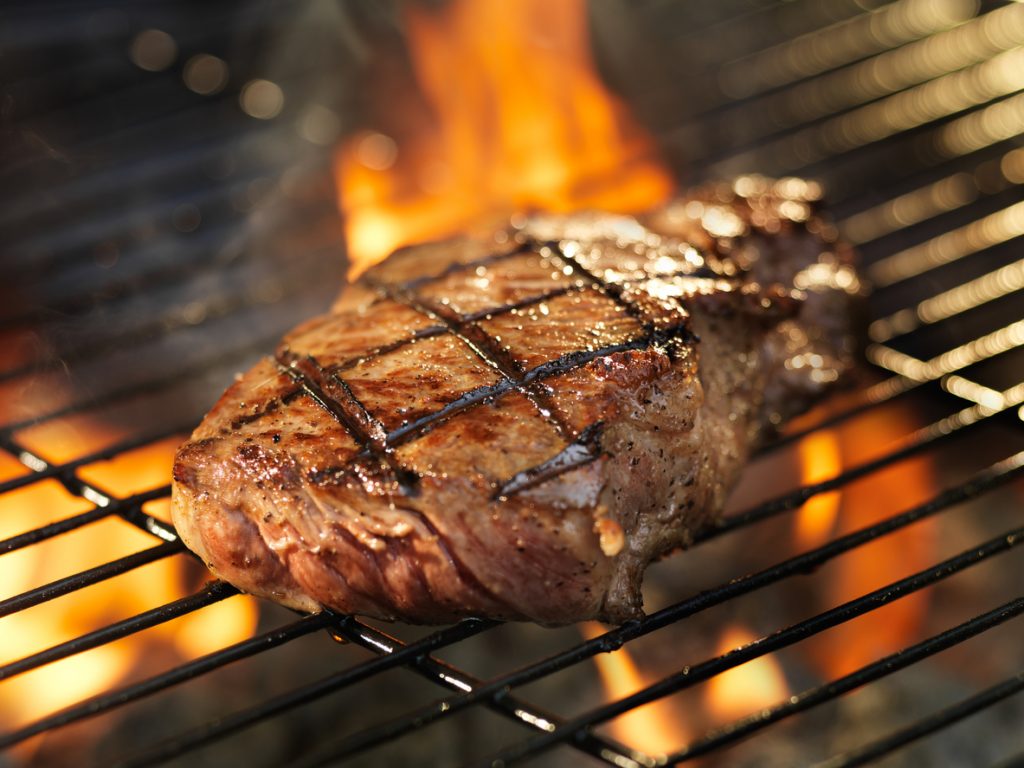 Additionally, an anabolic steroid called trenbolone acetate, or TBA, is given to conventionally raised cattle to increase their size. Unfortunately, TBA is eight to 10 times as potent as testosterone, a “condiment” you didn’t count on when chowing down on that strip steak. But, wait! There’s more! Many of these obesogens are fat soluble, so they will build up in fatty tissues of conventional meats. So, sink your teeth into a conventional steak, and you should know that it typically comes from cattle receiving six different steroids—all of which are obesogens. Buying “grass fed” beef is not good enough to avoid these chemical fellow travelers. Nor is the “natural” label. Only the USDA “organic” label can guarantee that additives have not stowed themselves away in an animal’s fatty tissue, the marbling that makes steaks so tender and tasty. When it comes to fruits and vegetables, can’t we wash chemical residue off before consuming? Turns out that a quick rinse is not going to do the job. A recent study in the Journal of Agricultural and Food Chemistry found that soaking produce for eight to 12 minutes in a solution of water and baking soda did some of the heavy lifting for a sample of Gala apples. Oh, yum! Even after the long soak time, though, there were some pesticides that the baking soda couldn’t get to. Thiabendazole and phosmet, like many other substances, seep into the skin and flesh. Penetration of the fruit has its limits, though; the chemicals run out of steam before getting too far beyond the surface. But that interior contamination will not be washed away by rinsing or soaking the fruit. To be fair, the Journal of Toxicology has pointed out that even the residue detected in the Dirty Dozen fell below the acceptable limit set by the Environmental Protection Agency. But knowing that is about as appealing as knowing that the number of rodent hairs in your box of breakfast cereal is below the acceptable limit too. Yuk. Obesogens may not have the last laugh on us, though.

“Avoiding the most obesogen-laden foods for just five days can reduce the contaminants in your body by 80%,” according to Stephen Perrine, food and fitness expert and author of “The New American Diet: How Secret Obesogens Are Making Us Fat.”

And, in the end, that does make buying organic seem like the easier route to take, for general health and that perennial motivator weight loss. Or at least not weight gain! The post Dirty Dozen: A Surprising Source of Weight Gain appeared first on Prime Women | An Online Magazine. 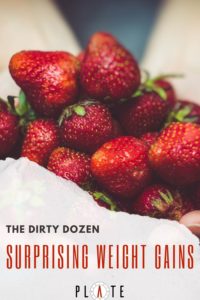