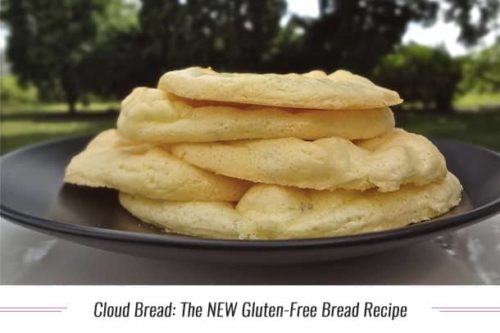 Cloud bread is one of Pinterest’s top 10 health trends for 2016. It’s not a Pinterest fad, though. On Instagram, #cloudbread yields over 2,600 posts, which doesn’t include variations like #cloudbreadpizza or #cloudbreadboard.

So, why is cloud bread the food darling du jour? Well, it might start with the cloud bread recipe itself: It’s deceptively simple — three or four ingredients. Cloud bread, also sometimes called “oopsie” bread —maybe because the first baker forgot the flour? — is also low-cal, low-carb and gluten-free, which makes it a dieter’s trifecta.

The standard cloud bread recipe calls for eggs, cream of tartar and cream cheese. From there you can add herbs for a little zest if you’re using the bread, for instance, as a pizza base. Or, you can add a little sweetener, such as honey, if you are using it as a sandwich base. That’s it. Cloud bread can be made ahead and stored in the fridge or freezer until you’re ready to use it. Could anything be simpler?

A typical piece of cloud bread has about 40 calories vs. 80 for a slice of standard bread. SparkRecipes.com breaks out cloud bread calories this way:

The SparkRecipes food nutrition database was used to calculate variations of the cloud bread recipe, based on different ingredients.

Kristen Smith, a registered dietician, food blogger and mother, started experimenting with cloud bread a few years ago. She says she’s seen traffic go up 10x this year to each cloud bread recipe on her blog, 360 Family Nutrition.

Smith says certain populations, such as those looking for diabetic bread recipes and those interested in low-carbohydrate diets, have known about cloud bread for a while. “But in 2016, it’s become a real trend,” she says.

As a dietician, Smith sees why people on the hunt for diabetic bread recipes end up with cloud bread. “They have to be aware of the carbohydrate intake,” she says. “Carbohydrates break down into sugar and their body doesn’t process blood sugar the same way. They still need some carbohydrates but they need to be conscious of the amount of carbs they consume. If a diabetic wants other carbs in a meal, cloud bread is a good mix for them. They can enjoy the sandwich with fruit and milk.”

Free of any grains, cloud bread is also a great alternative for those seeking a gluten-free bread recipe. Smith does offer this caveat about cloud bread: “It doesn’t mimic bread’s taste,” she says, calling it more a holder for other goodies rather than something to eat alone. “It’s a substitute but not identical in terms of texture and flavor.”

Judy Heinrich, who blogs at I’m Bored—So Let’s Go, uses a basic cloud bread recipe as the base for her many creative pizza toppings.

“I was probably trying to lose weight when I first discovered cloud bread,” she says. “You crave bread so I was trying to find something different to swap out.”

Heinrich does offer one caution when trying any cloud bread recipe: be careful whipping the eggs, which are divided between yolks and whites. “It’s like a meringue,” she says. “You have to be cautious not to deflate the egg whites when you fold them in.”

“It helps keep the structure of the bread,” Smith notes. She adds that without that step, your cloud bread recipe won’t come out the way it should.

Do you have a favorite way to use cloud bread? Share your ideas in the comments below.